From 2007 to 2014, the Twitter account @everyword painstakingly tweeted every word in the English language to thousands of riveted followers worldwide. Containing all 109,157 words from the original run of the account, along with accurate counts of the number of times each was favorited and retweeted by Twitter users, @everyword: The Book provides an accelerated, “director’s cut” experience of the English language like no other—as well as, in Parrish’s writing on her methods, inspirations, and reactions to the initial reception of her work, a deeply personal look at the intersection of conceptual art and secret humanity.

“I love Everyword. They say a good writer can make words come alive, but watching thousands cheer and jeer Everyword towards its pointless goal was more exhilarating than any novel I’ve read in years. I hope they invent enough new words so that Everyword can start up again.”

“Surely no one would read through a dictionary this way, index finger underlining each consecutive word — so many of them either mundane (“a”) or trivial (“aalii,” a Hawaiian plant). And yet, since @everyword revved up in the fall of 2007, the account has attracted more than 92,000 followers and inspired a wave of copycats and spin-offs. . . . Parrish suspects her creation is the most widely read piece of conceptual literature in existence.”

“Allison Parrish has designed a bot that allows followers on Twitter to savour one word at a time out of context—each word offered to the reader, like an éclair, for delectation, until the device has, at last, exhausted this smorgasbord. A “conceptual dictionary” (recording the popularity of its own lexical entries)—this inventory lists all the “components” in the lovely, if not brutal, machinery of discourse itself. The book itemizes every piece of a common puzzle, out which of which we must make our individual identities for expression in the world. Find your word—and like it.”

“One of the internet's most beloved bots.”

“In the days of the early letters, we felt footloose and fancy-free. It seemed, for a while, that the dictionary and its roughly 109,000 entries would last us for the rest of our natural lives. Years passed. Words came and went at a stately pace. The most retweeted among them were sex and weed, those poles of the human condition. But things took on a sudden urgency earlier this year when x, y, and z came around. None of us felt young anymore—we were living in the twilight of the alphabet, suddenly, acutely aware of our own mortality. @everyword, once a fixture of the Twittersphere, was soon to be snuffed out by Fate, as we all must be.”

“At long last: every word in the English language compiled in a single volume.”

“As an expression of conceptual poetry, essentially “uncreative” writing, @everyword showcases Twitter’s ability to be used as a medium for artistic expression and social commentary.”

“Everybody knows @everyword, the everyday bot for the everyman. Everyone thinks everything about it, heading everyway to everywhere. The system does not omit or overword, so there is no reason to reword its output for a book. You need no afterword or foreword to appreciate its buzzword, byword, catchword, codeword, crossword, headword, keyword, loanword, password, swearword, or watchword.”

“With a few dumb lines of Python code, Everyword manages to say more in a single word than most human Twitter users ever do.”

“From the meeting of a bot, a corpus, and a platform to that stable inscription technology known as the book, Allison Parrish has brilliantly transformed what we have known as the list poem. Like a microfiche archive of daily newspapers or a collector’s folio of heavily trafficked pennies, each word featured in @everyword: The Book has already lived a full and unknown life in another realm. The book is an afterword, a new direction derived from and driven by the poetics of digital communication. The beauty of @everyword is bound by the delivery of digital inevitability (what could be more perfect for Twitter than the rote reproduction of every word in order?) and the bookend of analog impossibility (what could be more unlikely than 3,000 pages indexing the output of a Twitter bot?). It is the transposition of @everyword to the static pages of the codex that astounds the reader. Drifting through these pages, an unfathomable narrative emerges within favorites and RTs, between lost replies and hidden meanings, each leaving a mysterious trace in the statistical overlay of use. In this way, the internet’s most beloved bot performs an even greater feat, translating not just an entire platform to literature, but transfiguring every word in turn. Put differently, in a word, this (RT: 416) is (RT: 1,645) essential (RT: 0) reading (RT: 28).”

“This afternoon, @everyword will send its final missive. . . . and the rest will be silence.”

In order to download this book you must purchase it at or above the minimum price of $10 USD. You will get access to the following files: 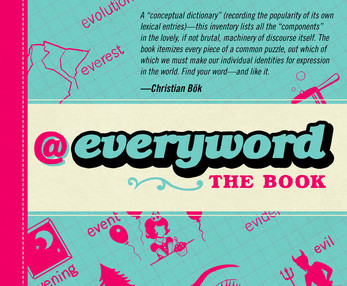