Behind the fluorescent veil of modern big-business video games, a quiet revolution is happening, and it’s centered on a tool called Twine. Taken up by nontraditional game authors to describe distinctly nontraditional subjects—from struggles with depression, explorations of queer identity, and analyses of the world of modern sex and dating to visions of breeding crustacean horses in a dystopian future—the Twine movement to date has created space for those who have previously been voiceless within games culture to tell their own stories, as well as to invent new visions outside of traditional channels of commerce.

Videogames for Humans, curated and introduced by Twine author and games theorist merritt kopas, puts Twine authors, literary writers, and games critics into conversation with one another’s work, reacting to, elaborating on, and being affected by the same. The result is an unprecedented kind of book about video games, one that will jump-start the discussions that will define the games culture of tomorrow.

INCLUDES PLAYABLE VERSIONS OF ALL THE GAMES

“With each chapter in Videogames for Humans I immediately felt a specific kind of affectation I often associate with Twine games—contemplative, slow, mysterious and exciting. These are games that often beg for reflection and context, and it’s apt that artists working in a medium as seemingly antiquated as interactive fiction are developing works of digital play and storytelling with such depth.” --VICE Motherboard

“Videogames for Humans contains fascinating conversations with Twine creators curated by Merritt Kopas. And if it sells enough copies, a Twine version is, of course, to be constructed.” --The Guardian

“[Kopas’s] new book Videogames for Humans . . . documents a movement with women at the front, as ‘friends, lovers, or something in between’ . . . the anthology displays the mottled breadth of its contributors.” -- Penguin Random House / Hazlitt

“Game developer, speaker, and writer, Merritt Kopas has concentrated on how games can explore the relationships between people...if you can write, you can use Twine. Because of this, Twine is known for experimental and diverse games, often from people who have traditionally been voiceless.” --Playboy.com

“Videogames for Humans contains invaluable criticism presented by thoughtful voices. . . Those who are at least somewhat familiar with Twine shouldn’t pass up this massive, engaging tome.” --Paste Magazine

“[Kopas has] gathered Twine game creators and critics to annotate and discuss one another's works—the result isn't just a unique angle on games criticism; it's a gathering of many of the most prominent creators in that unique space.” --Boing Boing

“There are a great many stories sandwiched between the covers of Videogames For Humans—too many to list in detail here. If you’re remotely curious, then I suggest you get a copy of the book and try them out for yourself...a showcase of just what Twine can do...” --Neon Magazine

AS WELL AS
PLAYTHROUGHS BY:


"Thanks to tools like Twine and to a vigorous creative scene, alternative creators have seized control of that creaky word, hypertext, hybridized it with the videogames they grew up loving, and have turned it into a powerful, in-your-face, diverse, exciting field. Voices we have never heard before. Experiences we have never had before. Art that, well, hasn’t been arted before. And here it is, reflected back at you through playthroughs by some of the most interesting writers in games. There is no better snapshot of the scene as it stands than this book."

—Raph Koster,
author of A Theory of Fun for Game Design and designer of Ultima Online

“For ages we've been hearing calls for diversity in game making and criticism. Most of these calls only echoed in the windowless, neon-lit conference rooms of academia. As mutant practitioner-theorist, merritt manages to contaminate the living gaming discourse, emerging as a powerful and yet nuanced voice in the indie movement.”

“I’m a total Twine neophyte and I don’t like nerds, but I love this book. The games—as played by authors—turn tangential, nostalgic, and thinky, but never boring, and the reader is filled with surprises and vicarious aches. merritt is wickedly wise, and it’s a pleasure to gain from her gamesmanship.”

In order to download this book + games you must purchase it at or above the minimum price of $10 USD. You will get access to the following files: 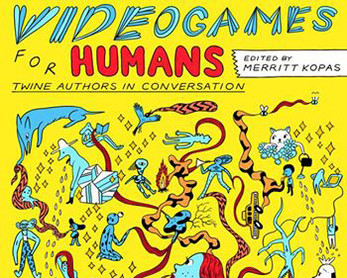